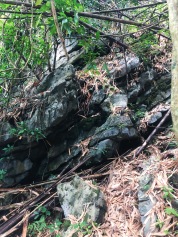 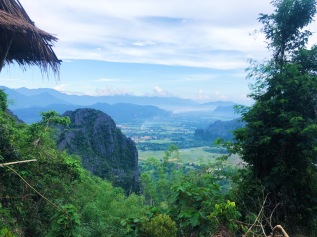 View of the valley from the lookout 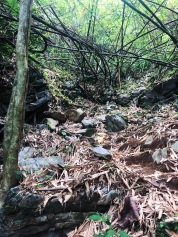 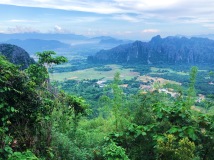 View from the top of the lookout

Struggling on the trail 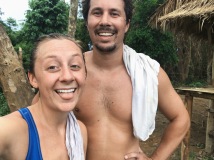 Made it to the top!

After spending a couple relaxing days in Luang Prabang, we booked an early morning mini bus to the town of Vang Vieng for a quick 48 hour trip. The alarm went off at 5:45am, and we hopped in an empty van with only one other guy. After driving for only 15 minutes, we were transferred to a different van–this is where the fun began. We drove over a windy mountain pass, and he drove like he was in a high speed chase. We zoomed around the turns (we tried to nap but were being tossed around the backseat), and thankfully, safely pulled into Vang Vieng four hours later.

The town is much less developed than Luang Prabang, but has a quiet charm, nestled next to mountains and located on the river. We checked into our hostel, the Rock Backpackers Hostel, and ate a delicious meal on the river at the Green Restaurant. We noticed the town was absolutely dead, and after a nice long siesta (most likely a result of the sickening car ride), we rented bicycles and rode to a hike that promised a beautiful lookout over the town.

Looking for an enjoyable stroll with a view, we were slapped in the face the second we started walking. The hike, Pha Ngern Viewpoint, is essentially a steep staircase straight up a mountainside. We were four point crawling through the jungle at some points, and to make matters more difficult, we didn’t bring any water. After 40 minutes of huffing and puffing, we made it to the bamboo lookout, and enjoyed a well-earned view of the valley. The walk down was quick, and when we got back into town, we slugged water and found the best Thai restaurant in all of Vang Vieng, Happy Mango (I’ve missed my green curry).

The next day was the reason we went–essentially why anyone goes–to Vang Vieng. Tubing.

We gathered with a group of people from our hostel, no shoes, sunglasses, phones (which is why we collectively have about four pictures from this trip), or anything that we wouldn’t want to lose, and paid 60,000 kip for our tube. Since the town cracked down on tubing due to excessive partying, there are now only two bars along the Nam Song River route… Which was fine by us, especially since the first bar appeared after a short two minutes after we hopped in our tubes. We collectively drank Lao whiskey and coke and Laobeer, and loudly sang karaoke until it was time to ship off in our tubes for the longest part of the journey. Once we were all pretty crispy from sitting in the sun, the second, and last, bar appeared. After some more fun and games, we all could barely wait for the tuk tuk to come save us so we could nap, and snarf some food. It was definitely an experience worth the long bus trip to Vang Vieng, especially when you realized you were tubing down a beautiful river in Laos beside looming limestone rock mountains, all with a beer in hand.

Unfortunately, our short stay was over, and we had to catch our bus back to Luang Prabang. We initially had plans to catch a three day boat ride to Chiang Mai, but those changed the following morning… More to come on our adjusted plans later!

Hey! I’m Lauren, and quit my desk job to travel around—just like the rest of my demographic—but still proud to do it. Graduated from Cornell, was working in PR in Denver, CO, and am moving to LA after my travels. Enjoy my stories! View all posts by laurenjlloyd

There was an error retrieving images from Instagram. An attempt will be remade in a few minutes.